Adventure in Victoria Falls – what a week!

Last week was perhaps the greatest week of my life, or at least the most adventurous week. Took a three hour direct flight from Capetown to Victoria Falls, where we landed at a tiny airport.  There was a rather unique signnear the terminal entrance explaining Zimbabwe’s arrival or entry tax system. It basically read, “Pay us USD $20 now or you can’t enter.” Who can argue with that? So we paid our money and so began our Adventure in Victoria Falls.

By “we”, I’m referring to myself and Tom, a young British guy I met on the flight. By chance, we’d both reserved the Victoria Falls Backpackers Hostel. And like me, he’d always dreamed of stopping off in Victoria Falls after trekking around South Africa. My interest sprung from hundreds of hours watching David Attenborough (BBC wildlife presenter and director). The animals he filmed and studied fascinated me. Moreover, the natural beauty of the African continent captivated me.

Tom and I spent the rest of the day looking around town and signing up for tours and activities. We also caught our first glimpse of the falls, the gorge and the bridge crossing between Zimbabwe and Zambia. In the evening, we found a chic dining bar at a nearby resort and befriended some other young travellers. It wasn’t a late night because the next morning we had to get up with the sun in search of the ultimate adventure.

My primary reason for seeking adventure in Victoria Falls was to give white-water rafting a go on the raging Zambezi river. That day had arrived, and what a day it would turn out to be! It was advertised as a 15-hour excursion, meaning a really early start. At 6am we passed through immigration and crossed into Zambia. We found the tour company’s base, watched a safety-video, signed some waivers, then headed down into the gorge.

For the next 8 or 10 hours we paddled, floated and swam along one of Africa’s mightiest rivers. There were about 35 rapids in all and many kilometers covered. Surprisingly our guide “Toshi” was Japanese, a powerful little guy who spends the summer in Africa, then goes home for Japan’s summer. Cool life! He realized our crew was young, energetic and motivated. He told us that each rapid would have easy, challenging and hard entry points. We all agreed on tackling the hardest entries. Guess we wanted to get our money’s worth.

The adventure didn’t come without potential dangers. We saw hippos and crocs on occasion, especially in places where the river’s flow subsided. After lunch Toshi told us to stop paddling, throw our paddles in the raft, and jump in. Being about 40 degrees, we happily did so. For the next 2 or 3km we floated downstream in the cool waters. A refreshing if not surreal experience.

On the 90-minute drive back to Victoria Falls, we passed through some remote, perhaps nomdaic villages. The locals crafted beautiful goods made of various woods and grasses. We stopped briefly to buy some, hoping to make a small difference to their simple lives. As night fell, we arrived back at the border, had our passports stamped and walked back to the hostel. That night and the following morning, the aches and pains from the rafting and swimming began to take effect. Did I care? NO! It was well worth it. Without a doubt one of the best days of my life.

At first, the thought of safari on horseback was, I must admit, a little scary. I guess that’s because I’d seen the pure aggression of wild animals first-hand in Kruger. Despite the apprehension, Tom and I signed up with African Horse Safari for a half-day morning ride. Though neither of us was an expert horseman, our limited riding skills were more than enough for this relaxing trail ride. Starting near the falls with its lush vegetation before heading out into dry, open grassland, we encountered two distinct landscapes and ecosystems.

As the ride went on, I completely let go of my earlier fears and revelled in the experience. We observed several species, mostly grass feeders, like zebras, wildebeest and various antelope. Suddenly, we came across a herd of zebra, an animal I’d long wanted to see up close. Perhaps being on horseback helped us. The zebras appeared so relaxed around their distant cousins (not sure if that is fact or fiction). Anyway, I took the photo below from about 50m away. Very lucky! All in all, a great morning – although the legs and buttocks were a little sore that afternoon.

The time had come! Time to jump off a perfectly stable bridge and sail (or fall) 118m in a few seconds. We crossed the border into Zambia again and sought out the bungee company. We signed our indemnity forms, watched a safety video, then paced nervously back onto the bridge. Five minutes later it was my turn. Suddenly I heard “5, 4, 3, 2, 1 – BUNGEE!”

There were two surges, one of fear, the other adrenalin. I’m not sure if I screamed, it all happened so fast. After a few seconds, the rope reached its maximum length and bent. I violently bounced up and down and then was swung from side to side. Surprisingly, the whole experience was quite fun. About 10m below, white-water rafters were cheering me on and taking photos. I got a slight headache while waiting to be picked up, but that was just the blood rushing to my head. Awesome fun—highly recommended. So much so that upon reaching the bridge, I went and did it all over again. I had bought a 2 for 1 special. 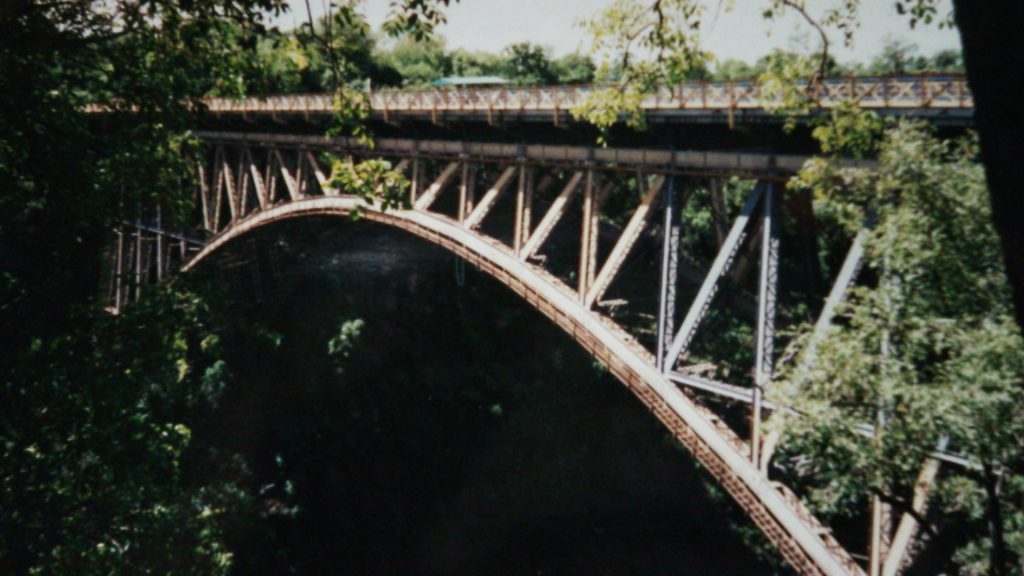 Why do people pay to jump off this bridge?

Before going to Victoria Falls, I hadn’t researched bungee (bungy) jumping or its methodology. At the jump site, the jump master suggested trying a scarier, more exhilarating jump. My first reaction was “How could anything be scarier than that?” He explained that by turning around and falling backward, it’s a totally different result. I went with the flow and gave it a try. First, I stood on the platform like an Olympic diver about to do a backward or inward dive.

My heels hung over the edge. I tucked in my arms to avoid rope burn, then jumped and fell backwards. All I remember is looking up to focus on the bridge. My brain freaked out—it thought I had just fallen. This jump was much scarier. Thankfully, the rope extended fully and it was over. There was no headache this time thanks to the harness around my waist. All I could do was swing, my mid-region a little sore, and admire the breathtaking gorge and river. My heart began to beat at a normal rate again, and I was chuffed.

The sixth day started slowly, in fact, it started with a pretty bad headache. However, after a few laps in the pool and some breakfast, I was as good as new. Jetboats, farewell dinner, last trip to see the falls, look over the edge.

Hot, sunny weather greeted me on the final morning. I left for the airport about 10am, but beforehand I headed to the local market. There I picked up some souvenirs for Graeme and Eileen in Johanessburg and my parents. I came across and bought a hand-crafted door-stop in the shape of a giraffe. Thought it would suit my parents living room. The detail in the carving is exquisite, and it only cost $15, without any bartering. My flight left just before midday. As it took off, I peered out the window in search of one last look at the falls. There they were, and the cloud of mist they create. Truly majestic!